At the first wedding, there’s a shock

The second wedding is unexpected

By the third, Delphie thinks nothing could surprise her. But she’s wrong . . .

Delphie is enjoying her brother’s wedding. Her surprise last-minute Plus One has stunned her family – and it’s also stopped any of them asking again why she’s still single. But when she sees all the missed calls that evening, she knows it can’t be good news. And she’s right.

Delphie has been living her best life, loving her job, her friends, her no-strings relationships and her dream house by the sea. Now she has to question everything she believed about who she is and what she wants. Is her mum right – is it time to settle down? Or does she want to keep on trying to have it all?

Each wedding of a glorious summer brings a new surprise. And as everything Delphie thought she had is threatened, she has the chance to reshape her future . . . 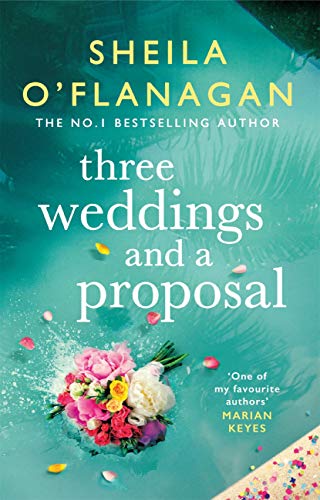 It’s a real treat when I have a book from this author on my list – I have always really enjoyed her writing.

Delphie is loving her brother’s wedding and having the best time, even if her family are reading too much between the lines about her plus one. Why can’t they see what she has achieved with her life? Her own home, a career she has worked hard for and good friends. Then one unexpected phone call changes it all; everything Delphie thought defined her is suddenly in question, and her life seems to be out of her control. Can she keep on living her own dream of not settling for anything less than perfect, or is her family right that settling down is the way to go? Another two weddings give her plenty of food for thought – is having it all too much to ask for?

Oh, I liked Delphie! Her family, from their perspective, only want the best for her; from where she’s sitting they completely misunderstand her. Delphie is a modern capable woman who loves her life but really doesn’t appreciate her family’s constant enquiries about her love life and every single woman of a certain age knows exactly how that feels! Sheila O’Flanagan has produced another charming read with a range of completely believable characters and several interwoven story lines which all add up to a terrific read. I have giggled, cringed and nodded my head so hard I’m surprised it’s not in danger of falling off! This is a wonderfully written tale, showing the author’s deep understanding of people, with a completely satisfying ending – just as I like! I love everything about this novel and definitely recommend it; I’m very happy to give it 5*.

My thanks to the publisher for my copy via NetGalley’ this is – as always – my honest, original and unbiased review.

I’ve always loved reading and when I was a child I used to write stories for my younger sisters as a bribe to make them do my share of the housework. It usually worked!

Ireland is famed for its writers, but for me growing up most of the novels were rural in both their settings and their points of view. I wanted to read books about people like me, who lived in the city and struggled with the chaotic bus timetable and had dreams and ambitions that had nothing to do with the farm. I also wanted to read novels in which the women were the heroes of their own stories and not simply there because they were someone’s wife, mother or daughter.

Although I was constantly writing, the idea of being a novelist was a bit of a pipe dream. I had to earn a living and so I got a job in finance. It was the complete opposite of anything I’d ever expected to do but – at least for a time – I enjoyed it and I did well.

But the dream wouldn’t go away and in my thirties I decided that I would make a real effort to write my novel. Eventually, after a couple of false starts, Dreaming of A Stranger was written and published and became an Irish bestseller.

Since then I’ve written more than 25 novels as well as 3 collections of short stories and 2 novels for children all of which have been bestsellers both in Ireland and overseas. They include The Hideaway, What Happened That Night, Isobel’s Wedding and Suddenly Single and my sales have topped 9 million copies around the world.

In most of my books, I put women in situations where they have to dig deep inside themselves to find their inner strength even though sometimes they struggle to realise it’s there. Readers often ask who my favourite characters are, but every one of the women in my books is as close to me as a member of my family. (For the time when I’m writing a book they’re even closer because they’re in my head 24/7. At least with the family I can put the phone down!)

Regardless of who my readers are, I always try to do three things when I’m writing:

I’ve been very lucky in having so many books published and hearing from readers all around the world. And I’m glad that, when times were tough, I remembered the quote that ‘a professional writer is an amateur who wouldn’t quit”

I’m a passionate advocate for increasing literacy and helping people who have come to reading late in life so that they can find the same pleasure in reading as I’ve had. I’ve taken part in a number of different televised projects to help people who’ve struggled with reading and writing and I’ve contributed to both the Quick Reads and Open Doors series of novellas for new readers. I’m also a board member of Fighting Words, the creative writing centre set up by Booker prize-winner Roddy Doyle where I’ve worked with teenagers to write their own published stories and retired people who are working on their memoirs.