Some people would describe Beattie Bramshaw as a pillar of the community. Many would applaud her numerous successes in the bakery competition at the annual village show. A small number might say, if pushed, that they find her a little on the bossy side. And one or two might just whisper the words ‘interfering’ and ‘busybody’ behind her back.

But no-one would have her down as a murderer.

So why is she being questioned in Dreighton police station after being found in the local allotments, at the dead of night, wielding a kitchen knife just yards away from where local lottery winner, Yvonne Richards, was found stabbed to death?

And what does all of this have to do with Doug Sparrow’s prize marrows?

Marrow Jam is a comedy crime caper in the spirit of Agatha Raisin. It will have you chuckling all the way through many a cup of tea.

Perfectly described as a ‘comedy crime caper’ this is full of chuckles!

Beattie Bramshaw knows everything and everyone in her village, the highlight of which is the annual village show. Competition is fierce is all categories so when a woman goes missing close to the allotments, Beattie turns out to be the unlikeliest of suspects. So why is she taken to the local police station and questioned?

Oh, there is so much more to this than just a murder! Like all good fun mysteries, there is lots going on, oodles of suspects and a side story or two all of which interact to make a very funny read. I’ve had quite the gigglefest reading this one, and for a debut novel it’s terrific! The characters are all fully formed with descriptions which make it easy to imagine them; the story line is amusing but sensible – if you know what I mean! It all makes sense, but is hysterically funny at the same time. For everyone who enjoys ‘cosy’ mysteries and especially the ones which will make you laugh, this is highly recommended. Definitely an author to keep an eye on and I’m happy to give this one four glowing stars.

My thanks to the publisher for my copy and to Rachel’s Random Resources for my spot on this tour; this is – as always – my honest, original and unbiased review. 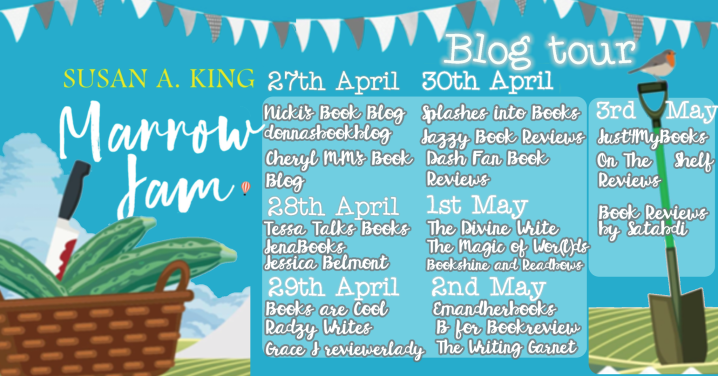 Susan A King lives with her husband in a quiet suburb in Hampshire. Between them they have four grown-up sons, all of whom have now flown the nest.
The inspiration for her first novel, Marrow Jam, came from her long experience and observation of competitors at the annual Romsey Show, where she regularly aspires to win Best in Show with her floral arrangements.
Marrow Jam, was shortlisted for the Write Here, Right Now novel competition, Bradford Literature Festival and is published by Eye/Lightning Books.