Zoe Callahan is having the summer from hell… and it’s about to get a whole lot worse.

She’s stuck in a dead-end job, her relationship is going nowhere, and the memory of the Kelvingrove Park Murders three years ago continues to cast a long shadow over every aspect of her life.

When a prostitute is brutally assaulted by Dominic Ryland, a rising political star with a suspiciously spotless personal reputation, Zoe leaps at the chance to distract herself with a noble cause, and sets out on a one-woman crusade to bring Ryland to justice.

But in doing so, she quickly finds herself on the wrong side of some very dangerous people – people who have reputations to protect and who would think nothing of silencing Zoe by any means necessary.

An explosive thriller set against the backdrop of a sweltering heatwave, Cruel Summer is the sequel to M.R. Mackenzie’s critically acclaimed In the Silence and the second instalment in the Kelvingrove Park Trilogy. 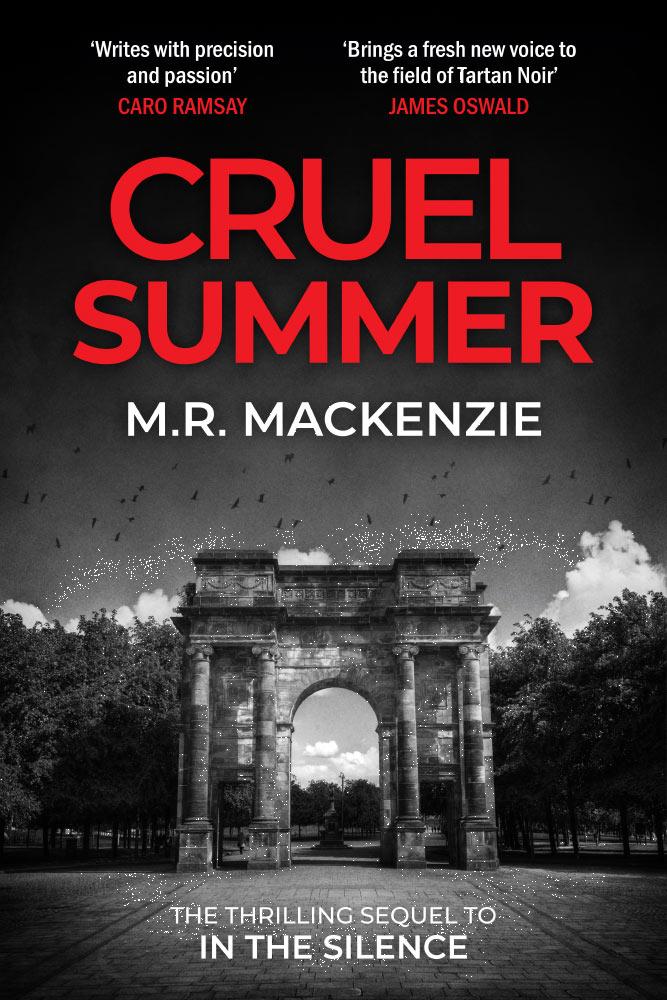 Having thoroughly enjoyed the first in this series, I was very excited to have the second in my tbr list .. and it more than lived up to my expectations!

Zoe Callahan finds herself unwittingly drawn into the wrongdoings of a local politician; with misplaced faith in the police authorities, Zoe assumes they will deal with the matter but that’s not what happens. Nor could she have foreseen the repercussions which would take place because of her naivety. Having brought unwanted attention to herself and those she loves, Zoe strikes up a friend with the unusual Fin and unwittingly gets into even deeper – and more serious – trouble.

This is an excellent sequel! An entirely new tale but with a nod to what went on in the first, it is a delight to see how the author’s work has evolved. Skilfully crafted and beautifully written, this is a gripping read full of suspense and tension which is nicely deflected with some fabulous Glaswegian humour. I love reading fiction set in different regions of the UK, and none more than novels set in my own neck of the woods. The locations mentioned are spread throughout the city of Glasgow giving a sense of reality. The characters are flawed and realistic, and as the story unfolds I found it completely believable and absolutely riveting. A fantastic thriller, and easily worth the five shiny stars I’m pleased to give it.

My thanks to author Michael MacKenzie for my copy. As always, all opinions stated here are entirely my own.

M.R. Mackenzie was born and lives in Glasgow, Scotland. He studied at Glasgow University and has a PhD in Film Studies. In 2016, he contributed a chapter on the Italian giallo film to Cult Cinema: An Arrow Video Companion.

In addition to writing, he works as an independent Blu-ray/DVD producer and has overseen releases of films by a number of acclaimed directors, among them Dario Argento, Joe Dante and Seijun Suzuki.