Once you let her in, she’ll never leave…

Some secrets aren’t meant to be kept…

When Grace returns to Abi’s life, years after they fell out at university, Abi can’t help but feel uneasy. Years ago, Grace’s friendship was all-consuming and exhausting.

Now happily married, Abi’s built a new life for herself and put those days behind her. And yet as Grace slips back into her life with all the lethal charm she had before, Abi finds herself falling back under her spell…

Abi’s husband, Rohan, can’t help but be concerned as his wife’s behaviour changes. As their happy home threatens to fall apart, he realises that there’s something deeply unnerving about Grace. Just what influence does this woman have over his wife, and why has she come back now?

A chilling story of guilt and obsession from Anna Kent. 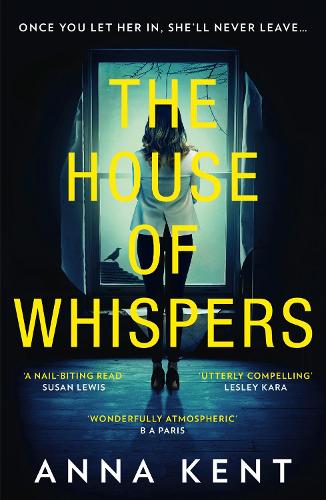 I expected this to be creepy and scary and it was – but even more so!

When Abi receives a letter from her university friend, Grace, telling her she’s returning to the UK, she remembers all the uneasy times they had when she fell under Grace’s spell and how belittled she felt. However, against her own best advice, she finds herself saying she can come and live with her; as husband Ronan is heading off on business it will provide Abi with company and, after all, her life has changed – she won’t be as easily influenced this time round – will she?

An utterly chilling read! This one had me quite mesmerised all the way through. I tend to take what I read at face value but always had the feeling with this one that there was something going on I wasn’t privy to. What a fantastic, fascinating story this is; packed with a range of intriguing characters and multiple surprises, I buried myself in this one and loved absolutely everything about it. Looking back, I wonder if I should have been able to join the dots but the truth is I was just enjoying it as it came. I was quite shocked at where it went but, on the other hand, it all made perfect sense! Most definitely an author who knows her stuff and is well worth following; this is a five star read and definitely worth my recommendation.

I became a published author after the manuscript for my first novel, ‘Coming Home’, won the Montegrappa Prize for First Fiction at the Emirates Airline Festival of Literature in 2013. The book itself was published in 2015 and, since then, I’ve written three more novels in the ‘domestic noir’ genre: ‘The Disappearance’, ‘The One That Got Away’ and ‘I Know You’.

I like to set things up for my readers so you think you know what’s happening and then I start to pull the carpet out from underneath so that you – and often the characters themselves – are never quite sure what’s really happening. Scratch the surface of my characters’ lives and you’ll always find something dark going on, as you can probably tell by the black covers.

My fifth book will be something slightly different – I’m working full-time on it at the moment and I can’t wait to share it with you.

I live in Dubai with my husband, two children and a little Tonkinese rescue cat who has us all very well trained. I write every day while she sleeps alongside me on a pile of old manuscripts. Writing isn’t an easy job, but I wouldn’t change it for the world. I hope you enjoy my books!