‘A tapestry of strong characters and accomplished writing’ Herald Scotland

It is 1911, and Jean is about to join the mass strike at the Singer factory.

For her, nothing will be the same again. Decades later, in Edinburgh, Connie sews coded moments of her life into a notebook, as her mother did before her.

More than a hundred years after his grandmother’s sewing machine was made, Fred discovers a treasure trove of documents. His family history is laid out before him in a patchwork of unfamiliar handwriting and colourful seams.

He starts to unpick the secrets of four generations, one stitch at a time. 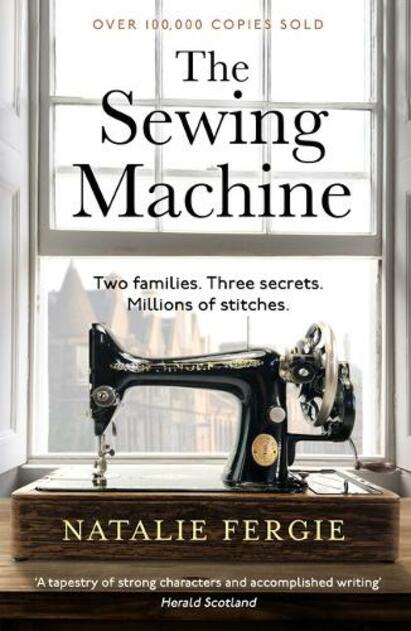 I’ve had this book for quite a while and it was well worth the wait!

This is a wonderful story which spans more than a century; the item which draws different generations together is a Singer sewing machine. Told alternately in both timelines, we follow Jean who worked in the Singer factory in 1911 and her grandson Fred who finds many documents relating to family who have gone before him. Beautifully told, this is a story with many facets while also full of revelations and I was completely enthralled from beginning to end. It may be a debut novel, but it is an accomplished one and so cleverly plotted. Never a dull moment and a definite recommendation to all readers who enjoy a good family saga which is just that little bit different. Absolutely delightful and earning 4.5*.

I purchased this novel; this is – as always – my honest, original and unbiased review.

Her debut novel, The Sewing Machine, was published in April 2017 and is set in Clydebank and in Edinburgh. You can walk to many of the real life Edinburgh locations in the book, browse the shelves in the library the characters visited, and stand in the grounds of the Royal Infirmary looking up at the windows, as they did.

Natalie writes mostly from home, in a room overlooking the Forth Valley, with the Ochil Hills in the distance. When she isn’t writing, she is plotting her next book while she makes soup, or walks the family labrador.

One thought on “The Sewing Machine by Natalie Fergie #BookReview #Unbound #4.5*”