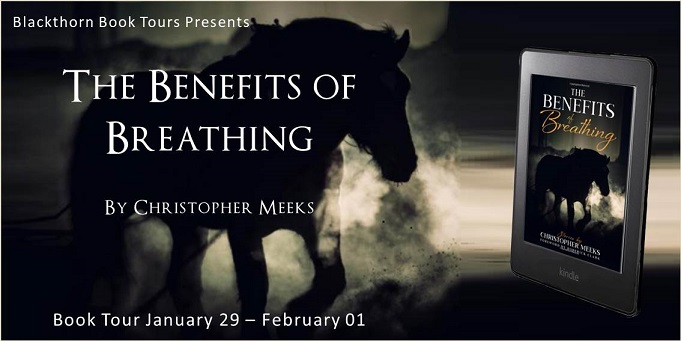 As Roderick Clark says in the Foreword, “It’s all about love, isn’t it?”

In The Benefits of Breathing, Meeks dives again into the human condition, particularly within relationships.

As one reader wrote on Amazon, “Some authors need a lot of words to describe their worlds and their people. Christopher Meeks says a lot with a little.”

The Los Angeles Times has called his stories “poignant and wise.” In this volume, “A Dog Story” captures a crumbled marriage and the love of a dog named Scrappy. “Joni Paredes” shows the birth of a new relationship that starts at a daughter’s wedding. “Nestor by the Numbers” follows one man’s often hilarious online dating experiences after he finally accepts his wife is gone. “Jerry with a Twist” shows an actor on an audition while his pregnant girlfriend helps him through a crisis.

These and seven other stories will bring you into the special world of Meeks.

As author James Jordan on Goodreads “My reward for reading Christopher Meeks’s marvelous collection of eleven stories, The Benefits of Breathing, was no less than an epiphany about great literature generally and specifically an insight into why this compendium of short fiction is great literature. ”

Relationships; we all have them and they often evolve into something different to how they began. This is a thoughtful collection of stories of many different kinds of love and like – some will make you smile, others will make you grimace but each is wonderful in it’s own way.

I was tempted to read and review this book by Lilyann from Blackthorn and her enthusiasm for it convinced me that I had to squeeze it into this month’s list – and I’m so happy I did! Christopher Meeks is a writer who pulls you right into each story and he has excelled in producing a fine array of differing characters all of whom are entertaining in their own way. I have felt their sadness and happiness, their uncertainty and – in the case of some – been appalled by their behaviour. Throughout it all, however, I have been uplifted and entertained by these delightful stories which I highly recommend to all readers. Definitely one of the most relevant and enjoyable anthologies I’ve come across, easily earning a full house of stars.

My thanks to Lilyann of Blackthorn for extending this tour so I could fit in; this is – as always – my honest, original and unbiased review. 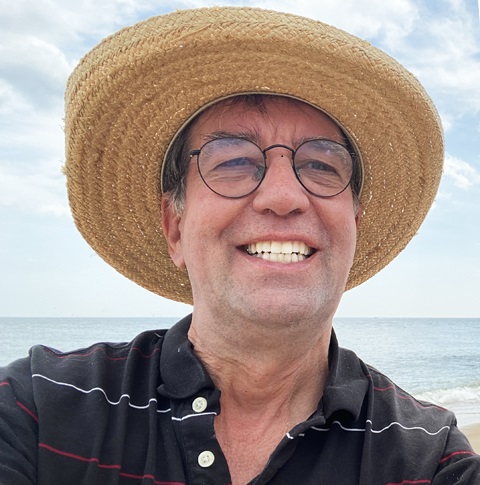 Christopher Meeks first published short fiction in a number of literary journals, and the stories are available in award-winning collections, The Middle-Aged Man and the Sea and Months and Seasons. This third collection, The Benefits of Breathing, was published this year.

In between writing short stories, he’s focused on novels. The Brightest Moon of the Century centers on a man who yearns for love and success, covering over thirty years—a tale that Marc Schuster of Small Press Reviews describes as “a great and truly humane novel in the tradition of Charles Dickens and John Irving.” His next novel, Love at Absolute Zero, focuses on a physicist who uses the tools of science to find his soul mate–and he has just three days to do it. Blood Drama has Meeks edge into a thriller. Most recently, A Death in Vegas is a mystery. Now he’s joined Army veteran Samuel Gonzalez, Jr., for a visceral tour of Iraq with the men and women on the front lines in Baqubah in The Chords of War. It’s about a musician, kicked out of his own band, joining the Army for discipline. He plunges into the horrors of combat. He tries to hold on with his music.