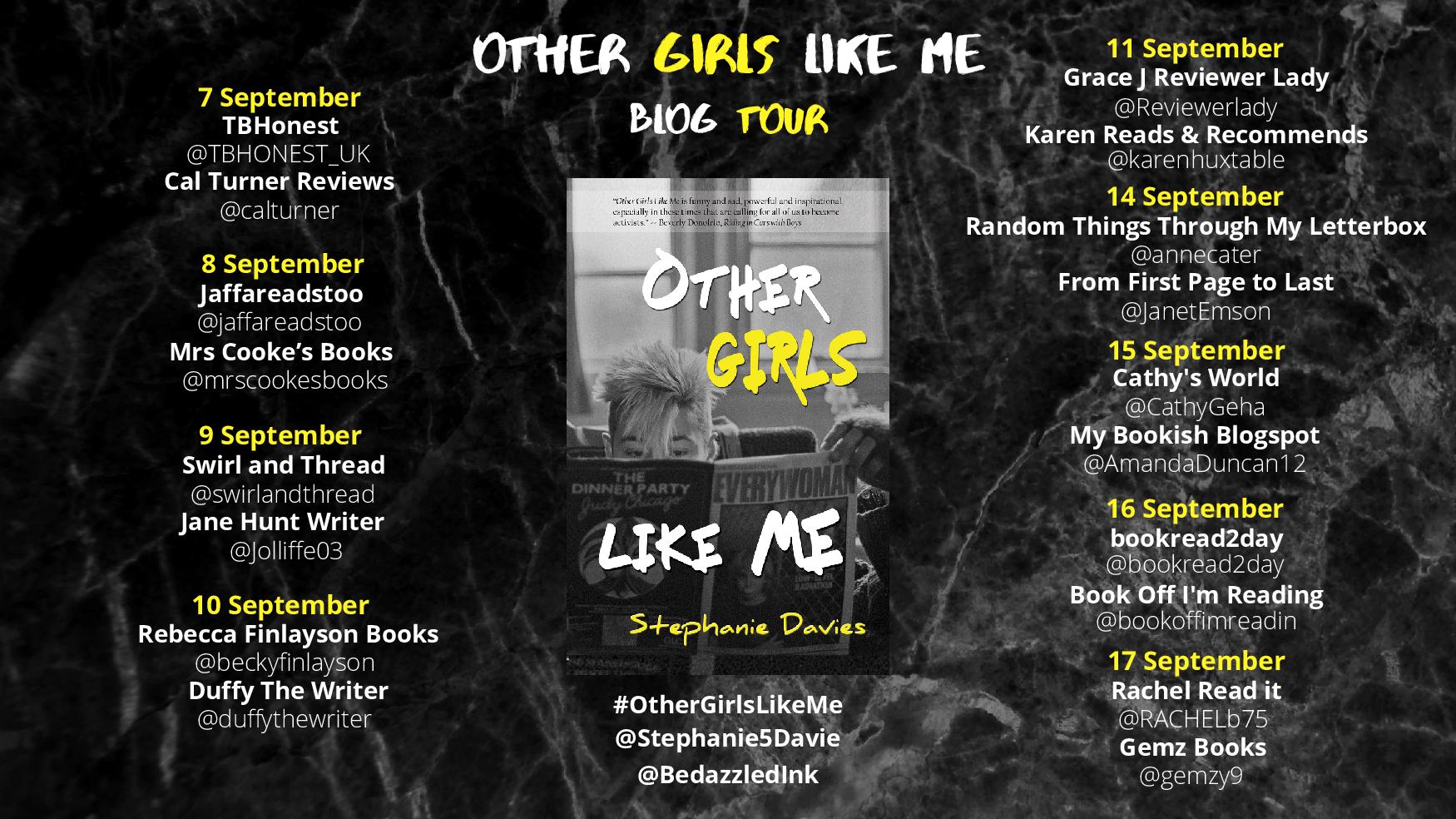 Till now, Stephanie has done her best to play by the rules—which seem to be stacked against girls like her.

It doesn’t help that she wants to play football, dress like a boy, and fight apartheid in South Africa—despite living in rural middle England—as she struggles to find her voice in a world where everything is different for girls.

Then she hears them on the radio. Greenham women—an irreverent group of lesbians, punk rockers, mothers, and activists who have set up camp outside a US military base to protest nuclear war—are calling for backups in the face of imminent eviction from their muddy tents. She heads there immediately, where a series of adventures—from a break-in to a nuclear research center to a doomed love affair with a punk rock singer in a girl band—changes the course of her life forever.

But the sense of community she has found is challenged when she faces tragedy at home.

ONE SUMMER DAY, a group of us was sitting on the ground in a large circle deep in the woods, playing a strange game with some newly arrived day visitors who had come loaded with cans of vegetables, bottles of juice, packets of rice and lentils, and, the all-time favourites, Cadbury’s milk chocolate and maltesers. One of the visitors, an imposing-looking woman with strict metal-rimmed glasses and a tight bun, told us she was a Brown Owl with a Brownies troupe in Leicestershire and we laughed and whooped in recognition as memories of Brownie badges, Brownie uniforms, and the Brownie pledge came flooding back. I’d only been a Brownie for one day. I’d pulled out the new brown dress from its cellophane packaging, slipped it on, and discovered to my dismay it was as short as my gym skirt. Then I’d picked up the ugly yellow cravat, wondering what it was before it dawned on me I was supposed to tie it around my neck. Then I’d walked down the village street to the Salvation Army hall, where a handful of girls from the primary school were standing in an unfriendly huddle. They glanced at me, but didn’t invite me to join them, so I stood alone, kicking my foot back and forth, looking around at the unwelcoming walls, breathing in the musty air. An earnest woman with buck teeth and calling herself Brown Owl taught us a song about how we were here to lend a hand, and asked us to recite a pledge of allegiance—to the queen, country, and God. I shuddered, wondering if my dad knew what they made us do in here. After Brown Owl told us what to expect in coming weeks—sewing, cooking, drawing, performing good deeds to earn a badge, and then, adding insult to injury, sewing the badges onto our dress sleeves—I’d stomped home in a fury.

“I’m not going back to the Brownies,” I’d announced to my parents. And I never did.

“I’m Brown Owl of Blue Gate,” Lucy cried, sitting next to me at the fire, and she went on to list a set of badges the rest of us had to earn—best fire-starter, most creative camp insurgent, most prolific practitioner of non-monogamy. I hadn’t made it past my first day in the Brownies, but I decided to be Brown Owl’s pet and began accusing others of being monogamous, refusing to do night watch, eating milk chocolate when they were vegan.

The women I accused protested, laughing, and I shook my head. “I saw you!”

“How about Biggest Creep badge?” Sally said, who was sitting next to me, smiling her dimpled smile. “You’d be a good one for that.” We were still laughing when we heard a holler from the gate. “Cruise Watch, Cruise Watch!”

We all jumped up and raced through the woods, leaping over tent pegs and skirting around tree roots at top speed, visitors and Greenham women alike. When we arrived at the gate, dozens of police officers were already running up the hill from town, a sea of dark blue descending upon the camp like a blot of ink, spreading to form a huge barricade protecting the entrance to the base and blocking us from the road. Their fast action left all of us stranded in the forest, unable to get into our vehicles and follow the convoy.

I watched helplessly from behind the line of police officers standing shoulder to shoulder, facing us. We couldn’t even get to the phone box on the housing estate half way down the hill to call our Campaign for Nuclear Disarmament friends in Newbury. When they got the tip-off, they would set into motion a sophisticated telephone tree of Cruise Watchers in neighbouring villages, each person picking up the phone to make a new call as soon as they hung up. These ordinary and extraordinary men and women stopped in the middle of baking bread or gardening or fixing cars or watching TV and leapt into action. They jumped into their vehicles and fanned out around the Berkshire and Hampshire countryside to track the nuclear monsters as they crashed along our narrow country lanes. Once, my mother saw one lurching ominously across the bridge in front of Dove Cottage—with its cooing doves living on its thatched roof in St. Mary Bourne’s village square, more used to Morris Dancers in bells than nuclear missiles on convoys— winding like a dragon along the Bourne Valley before returning to its lair, as if Sauron the Lord of Mordor had reached the Shire, and all was lost.

The British soldiers standing to attention inside the base were wearing what looked like World War II gas masks. They looked vulnerable as they watched two police officers open the gates for the monsters to appear—a convoy of massive military vehicles rumbling out at top speed, with American soldiers poised on the steps in glaring white head to toe protective gear, machine guns at the ready, as they took off between the sweet-smelling hedgerows toward a secret hidden spot where they would rehearse the moves they’d use to launch the deadly weapon.

We knew this was most likely a practice. But we also knew that one day it might not be. A chill formed in my heart as the reality sank in that these weapons of mass destruction were roaming around our countryside and may one day be launched when a President of another country thousands of miles away deemed it necessary, and there was nothing we could do to stop it.

Later that evening, when it was all over, an electric stillness descended upon the gate. I was sipping tea from a cracked mug and walked to the entrance of the gate to chat with a familiar police officer who was rubbing his hands to keep them warm.

It was dark, and the peace camp was invisible from where we stood in the eerie pool of yellow light at the entrance to the base. We were brightly illuminated for all to see, as if on a film set.

“Don’t you realize that nobody offered you any protection?” I said. “The Americans get the white super suits, the British soldiers get outdated gas masks. But you? You didn’t get a thing. So you’d be dead now. Doesn’t that bother you?”

He shrugged. He didn’t know what to say. He was just doing his job.

Stephanie Davies is a communications consultant who worked for many years as the Director of Public Education for Doctors Without Borders. A UK native, Stephanie moved to New York in 1991, where she taught English Composition at Long Island University’s Brooklyn campus and led research trips to Cuba. Before moving to New York, she co-edited a grassroots LGBT magazine in Brighton called A Queer Tribe. Stephanie earned a teaching degree from Aberystwyth University in Wales, and a BA in European Studies from Bath University, England. She grew up in a small rural village in Hampshire, where much of her first book, Other Girls Like Me, takes place.

Bedazzled Ink is dedicated to publishing literary fiction, nonfiction, and children’s books that celebrate the unique and under-represented voices of women.