Hunter has a past. Hunter has a secret. Can he unravel his past, keep his secret and keep Edinburgh safe?

Detective Inspector Hunter Wilson is called to the scene of a murder. DCs Tim Myerscough and Bear Zewedu found a corpse, but when Hunter arrives it has disappeared, and all is not as it seems.

Hunter recalls the disappearance of a dead body thirty years earlier. The Major Incident Team is called in but sees no connection – it is too long ago. Hunter is determined to investigate the past and the present with the benefit of modern DNA testing.

Tim has other problems in his life. His father, Sir Peter Myerscough, is released from jail. He, too, remembers the earlier murder. There is no love lost between Hunter and Sir Peter. Will Hunter accept help from his nemesis to catch a killer?

Hunter’s own secret is exciting and crucial to his future. Will it change his life? And can he keep Edinburgh safe? 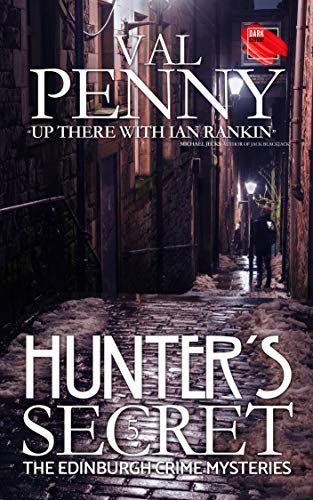 Oh, how I LOVE this series! Val Penny never fails to amaze me with her grasp of east coast Scottish dialect.

In this, the fifth book of the Edinburgh Crime Mysteries, things take a bit of a different and strange turn. When two of the team come across a very dead body, they don’t expect it to disappear before the alarm can be raised. And it is all too close to the first body Hunter ever had anything to do with when he was a lad – and it disappeared too! What is going on – and could there possibly be any connection? There’s only one way to find out.

Hunter has built a great team around him, and they each know how to do their job both singly and collectively. This latest tale shows how close they have become and their lives intertwine with the investigation. I love the diversity of this group and particularly enjoyed that it showed throughout the book. What a puzzling mystery! I couldn’t have solved this one no matter how long I took to work it out. With recurring characters providing much entertainment and things twisting and turning before we get to the crux of the matter, this is a beautifully written, well planned story. I’m so pleased with the news that there is another on the way – that’s one book I don’t want to miss! A cracking read, as always, and Val Penny earns every one of the five sparkling stars I’m happy to give.

My thanks to the publisher for my copy and to Rachel’s Random Resources for my spot on this tour; this is – as always – my honest, original and unbiased review. 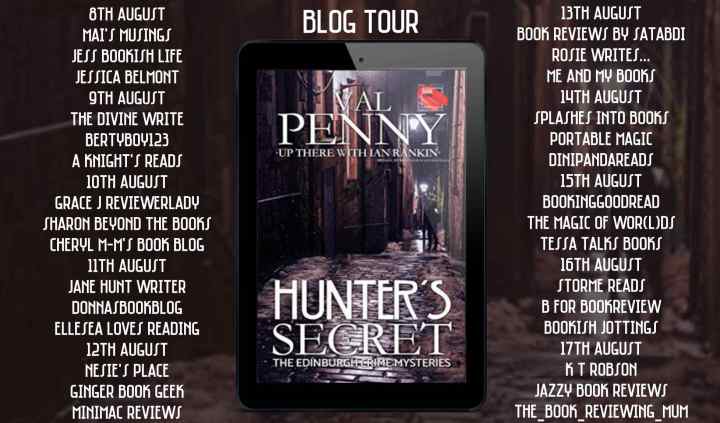 Val Penny is an American author living in SW Scotland. She has two adult daughters of whom she is justly proud and lives with her husband and two cats. She has a Law degree from Edinburgh University and her MSc from Napier University. She has had many jobs including hairdresser, waitress, lawyer, banker, azalea farmer and lecturer. However, she has not yet achieved either of her childhood dreams of being a ballerina or owning a candy store. Until those dreams come true, she has turned her hand to writing poetry, short stories and novels. Her crime novels, ‘Hunter’s Chase’ Hunter’s Revenge, Hunter’s Force, Hunter’s Blood and Hunter’s Secret are set in Edinburgh, Scotland, published by Crooked Cat Books. The fifth novel in the series, Hunter’s Secret, is published by Darkstroke. Her first non-fiction book, Let’s Get Published is available now.

Giveaway to Win a .mobi of Hunter’s Secret by Val Penny (Open INT) 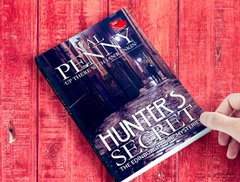 *Terms and Conditions –Worldwide entries welcome.  Please enter using the Rafflecopter box below.  The winner will be selected at random via Rafflecopter from all valid entries and will be notified by Twitter and/or email. If no response is received within 7 days then Rachel’s Random Resources reserves the right to select an alternative winner. Open to all entrants aged 18 or over.  Any personal data given as part of the competition entry is used for this purpose only and will not be shared with third parties, with the exception of the winners’ information. This will passed to the giveaway organiser and used only for fulfilment of the prize, after which time Rachel’s Random Resources will delete the data.  I am not responsible for despatch or delivery of the prize.