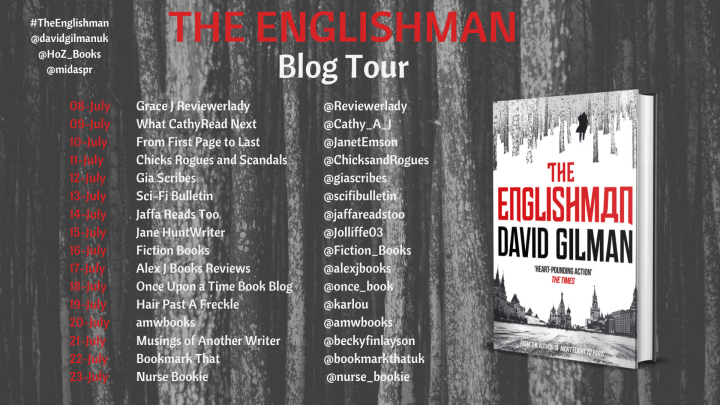 Penal Colony No. 74, AKA White Eagle, lies some 600 kilometres north of Yekaterinburg in Russia’s Sverdlovskaya Oblast. Imprisoning the country’s most brutal criminals, it is a winter-ravaged hellhole of death and retribution.

And that’s exactly why the Englishman is there.

Six years ago, Raglan was a soldier in the French Foreign Legion engaged in a hard-fought war on the desert border of Mali and Algeria. Amid black ops teams and competing intelligence agencies, his strike squad was compromised and Raglan himself severely injured.

His war was over, but the deadly aftermath of that day has echoed around the world ever since: the assassination of four Moscow CID officers; kidnap and murder on the suburban streets of West London; the fatal compromise of a long-running MI6 operation.

Raglan can’t avoid the shockwaves. This is personal. It is up to him to finish it – and it ends in Russia’s most notorious penal colony.

But how do you break into a high security prison in the middle of nowhere?

More importantly, how do you get out?

The road was long and straight, and the dark forest pressed on to the verge on both sides. Heaped snow, ploughed from the previous winter, was still frozen and had become an even higher bank from the fresh snowfall. He lengthened his stride and ran faster towards the rising sun.

He dared not stop.

The sun had reached the top of the trees either side of the chill, sunless gulley of a road. His laboured breathing muted the sound of the first vehicle. Instinct made him turn. Another vehicle was travelling behind that, its headlights weaving. There were probably twenty men in pursuit.

He leapt over the snow ledge on the side of the road and ducked beneath the overhanging branches. A slender track channelled between the accumulated snow and ice on the side of the road and where the tree trunks barred his way into the forest. He heard the engines change pitch. They were slowing. He ran: branches caught his face and he raised an arm. The rattle of gunfire cut the air above his head. He cursed his own stupidity. By brushing the branches away from his face he had disturbed the snow lying on them and the fine powder left low on the tree had been seen. He kept running, ducking lower, avoiding the branches. The thwack of bullets hit the trees where he had been moments before. They were shooting wildly. Ripping through the air. A storm of treebark and snow.

His breath came hard, The cold air raw in his lungs.

And then he ran out of track. He plunged into the low branches. Felt them whip his face. Searing pain scorched his thigh. He stumbled as another bullet tore into his side. Ignoring the pain he ran on. He was leaking blood. Leaving a trail. The distant sound of dogs echoing through the forest. His foot caught a root, tumbling him into deep snow. He slamed into a tree, the wind knocked out of him. He needed a moment to draw breath. He shook clear the pain and the sweat from his eyes. He could hear them now. Voices calling to each other. Fearful. Of him. He dared to close his eyes for a moment. More gunfire.

And he remembered what had brought him here.

David Gilman is an award-winning author and screenwriter. David enjoyed many careers – including firefighter, paratrooper and photographer – before turning to writing full time in 1986.  He has written many radio and television scripts including several years of A Touch of Frost. In 2007 his Danger Zone trilogy for YA was sold in 15 countries.

David Gilman is available for interview and to write articles. For furtherinformation and review copies please contact: