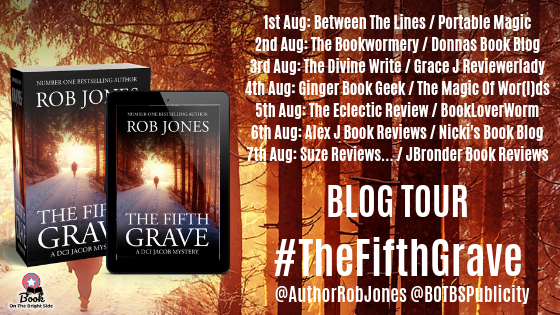 Poised to return to work after a long bereavement leave, Detective Chief Inspector Jacob is called away from the sanctuary of his home to attend the grim discovery of human remains over a quarter of a century old. Found deep in woodland with its own grim history, they give little up, but he is soon confronted with local gossip of hauntings and witches.

The mystery deepens when a second person is murdered in the same woods, and Jacob soon realises he is hunting a killer who will stop at nothing to keep the darkest of secrets buried in the past. Working alongside Dr Sophie Anderson, a criminal psychologist with her own damaged past, they close the net until tragedy strikes again in this gripping romantic suspense thriller.

Set in the wild and beautiful Wiltshire Downs, The Fifth Grave is a fast-paced whodunit with a dash of humour and romance and a killer twist.

First in the new DCI Jacob mysteries. Rob Jones is also the author of the Avalon Adventure series and the bestselling Joe Hawke novels.

An excellent, gripping read! A fabulous addition to the police procedural genre.

After a long period of bereavement leave, DCI Jacob – known to all as simply ‘Jacob’ – is on the verge of returning to work when he is thrown in at the deep end with the discovery of body. When it looks like a cold case, he and his team certainly have their work cut out – and then a second, more recent, body turns up. With pressure from the powers-that-be and a reputation as a bit of a maverick, Jacob has little evidence to go on so must dig deep to find out if what, if any, connections exists.

This is my first novel by Rob Jones and you can be sure it won’t be my last. What a book! Whilst there are no obvious red herrings, I freely admit to being completely blindsided; I did have a suspect in mind but, boy, was I wrong! It’s a very clever concept; the characters are many, varied and each one is interesting in their own way. Jacob’s team is a good mix of capabilities and it all adds up to a crime mystery you can really get lost in, and a fantastic book! I’m so glad I chose to read this one, and have no hesitation in recommending to anyone who is really into crime – it’s a thrilling and exciting novel and one which will get your brain working overtime! Definitely a five star read, no doubt about it.

My thanks to Book on the Bright Side Publicity for both my copy and the invitation to participate in this Blog Tour. All opinions are entirely honest and, of course, my own.

Rob Jones is the internationally bestselling author of seventeen archaeological adventure novels, including thirteen in the Joe Hawke series. Originally from England, today he lives in Australia with his wife and three children.