‘I’m your husband, Chloe. We’re a partnership now and we do what’s best for us as a couple.’

Chloe finally feels like she’s got her life together. After a difficult childhood and losing both parents, she worked hard for the life she loves in lively Brighton, helping people as a physiotherapist. And then she meets the perfect man.

It’s a whirlwind romance, but Dan is handsome, funny, and simply the kindest man she’s ever met. When she sees him standing by the altar, tears glistening in his eyes, she knows this will be for always.

As they sunbathe on their honeymoon island, laughing over drinks, planning their future with their feet in the sand, Dan jokes that he’d like them to stay there forever.

At first, Chloe couldn’t agree more. It’s tempting to imagine truly leaving her troubled past behind. But as the honeymoon goes on, he becomes increasingly adamant. They shouldn’t leave. In fact, he won’t let her…

Different .. so very different, and such a fantastic read!

Chloe has a settled life, but the one thing missing is romance. She dreams of finding her ideal partner, settling down and living happily ever after. She despairs of it ever happening for her, and then her next elderly patient is accompanied by her grandson  – and he is HOT! And he asks her out. Dan is warm, kind, funny and very loving and their relationship moves on at speed, resulting in a wedding followed by – of course – a honeymoon. Will it be happy ever after for Chloe and Dan?

I wondered at the start where this one was heading, but I needn’t have worried. It turned into an engrossing and gripping read which unfolds slowly and tantalisingly. It’s one of those books that I have both muttered under my breath and shouted at and, it has to be said, enthralled by. Finding out about Chloe’s past little by little magnified the intensity  of the story, and I debated inwardly where it was headed throughout; I need not have worried, as the ending was not only well worth waiting for, but it was quite surprising and rather magnificent. An amazing read, and one I’m delighted to recommend and give five shiny stars. Superb!

My thanks to publisher Bookouture for my copy via NetGalley. This is my honest, original and unbiased review. 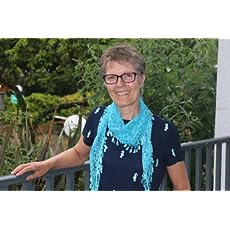 Rona is the author of psychological thrillers KEEP YOU SAFE, LOVE YOU GONE and THE HONEYMOON.

She lives on the Isle of Man with her husband, two dogs and three guinea pigs. She is an outdoorsy person and loves stomping up a mountain, walking the coastal paths and exploring the wonderful glens and beaches on the Island while she’s plotting how to kill off her next victim. She has three children and two step-children who are now grown up and leading varied and interesting lives, which provides plenty of ideas for new stories!