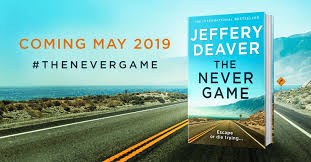 A student kidnapped from the park.
Nineteen-year-old Sophie disappears one summer afternoon. She wakes up to find herself locked inside a derelict warehouse, surrounded by five objects. If she uses them wisely, she will escape her prison. Otherwise she will die.

An investigator running out of time.
Sophie’s distraught father calls in the one man who can help find his daughter: unique investigator Colter Shaw. Raised in the wilderness by survivalist parents, he is an expert tracker with a forensic mind trained to solve the most challenging cases. But this will be a test even for him.

A killer playing a dangerous game.
Soon a blogger called Henry is abducted – left to die in the dark heart of a remote forest – and the whole case gets turned on its head.

Because this killer isn’t following the rules; he’s changing them. One murder at a time…

A stimulating and spellbinding read – first in a brand new series – from international best-selling author of the Lincoln Rhyme books and many more.

When his daughter suddenly disappears, her father knows that she hasn’t just run away. With the authorities not taking him seriously, he puts up a reward. Enter Colter Shaw, a  man who searches for missing people where there is monetary gain to be made. There are so many things he is not, but his skills are not in question; but this isn’t a novel about one missing person. It’s about so much more.

Colter Shaw is a protagonist like no other I’ve come across; his upbringing was, to say the least, unconventional. Shaw is a multi-faceted character, and although I feel as if I know him better than when I opened at the first page, I definitely get the impression that there is so much more to come. This is a superbly crafted book! A phenomenal, unpredictable read this is full of twist and turns, enigmas and revelations. I LOVED it! This is going to be a must-not miss series, and I’ll be watching out for the second one. Utterly superb! It’s not often I find myself absorbed in a story to the exclusion of everything else, but that is exactly what happened here – I’ve even consumed less coffee! Sometimes, five stars are just not enough, but that’s the very best I can offer, and this one has earned each and every one of them, several times over.

My thanks to publisher Harper Collins for my copy via NetGalley. All opinions given here are entirely my own.

A former journalist, folksinger and attorney, Jeffery Deaver is an international number-one bestselling author. His novels have appeared on bestseller lists around the world, including the New York Times, the Times of London, Italy’s Corriere della Sera, the Sydney Morning Herald and the Los Angeles Times. His books are sold in 150 countries and have been translated into over twenty-five languages. He has sold 50 million books worldwide.

The author of over thirty-five novels, three collections of short stories and a nonfiction law book, and a lyricist of a country-western album, he’s received or been shortlisted for dozens of awards around the world.

Deaver has been nominated for numerous Edgar Awards from the Mystery Writers of America, an Anthony, a Shamus and a Gumshoe. He was shortlisted for the ITV3 Crime Thriller Award for Best International Author.

Jeffery Deaver was President of the Mystery Writers Of America organization in 2017 and 2018.