From the ruins of post-Roman Britain, a warrior arises to unite a troubled land.

Britain in the late Fifth Century is a troubled place – riven with tribal infighting and beset by invaders in search of plunder and settlement. King Uther is dead, and his daughter, Morgana, seizes the crown for her infant son, Mordred. Merlyn’s attempt to present Arthur as the true son and heir of Uther is scorned, and the bewildered teenager finds himself in prison. Here our story begins…

Arthur finds friends in unexpected quarters and together they flee. Travelling through a fractured landscape of tribal conflict and suspicion, they attempt to stay one step ahead of their pursuers, whilst keeping a wary eye on Saxon invaders menacing the shoreline. Arthur’s reputation as a fearsome warrior grows as he learns the harsh lessons needed to survive and acquire the skills of a dux bellorum, a lord of war.

Tim Walker’s Arthur Dux Bellorum is a fresh look at the Arthurian legend, combining myth, history and gripping battle scenes. Although in a series, it can be read as a standalone novel.

My guest reviewer for this novel is my husband, John.

He enjoys thrilling, exciting action reads and is a big fan of Clive Cussler and, of course, Tim Walker!

For anyone who watched the ‘Merlin’ tv series in recent years, the characters in this novel will seem familiar .. King Uther, his son Arthur, Morgana and Merlyn. Make no mistake though, this is a highly original novel.

When Uther dies, Morgana steps in and places her son on the throne and Arthur – whom Merlyn considers the true heir – is thrown into prison. It is now down to others to help him escape, and no-one could foresee the battles ahead.

Tim Walker once again produces a difficult to put down book. Combining a mix of history and storytelling, he delivers a rip-roaring read! His take on the Arthur fables offers a believable version of events at the time. He combines the history we know with his own tales, giving us action aplenty as Arthur’s army fights the good fight and we are kept in suspense as to the eventual outcome. Frankly, I eagerly await the next instalment to see where Tim goes next with this superb saga!

My thanks to the author for providing me with a copy of his novel. All opinions expressed here are entirely my own. 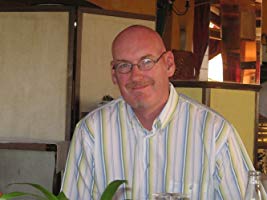 Tim Walker is an independent author based in the UK.

His latest book is, ‘Arthur, Dux Bellorum’, published in March 2019, the fourth book in, ‘A Light in the Dark Ages’ historical fiction series, set in Fifth and Sixth Century Britannia. Book one is ‘Abandoned’ (second edition 2018), followed by ‘Ambrosius: Last of the Romans’ (2017), and book three is ‘Uther’s Destiny’ (2018). Series book covers are designed by Canadian graphic artist, Cathy Walker. The aim of the series is to connect the end of Roman Britain to elements of the Arthurian legend, through researched history, presenting an imagined history of the early Dark Ages.

Tim lives near Windsor – close to the River Thames – the inspiration for his first book of short stories, ‘Thames Valley Tales’ (2015). In September 2017 he published a second book of short stories, ‘Postcards from London’. These stories draw on the local history and current affairs of these places where the author has lived and worked.

His first novel was a political thriller, ‘Devil Gate Dawn’, that received pre-publication exposure on the Kindle Scout programme in March/April 2016. It found a wide readership due to its unnerving predictions of a post-Brexit Britain beset by political turmoil under King Charles III’s rule and buckling under attacks from terrorist groups – and a dystopian portrayal of life in Trump America.

In early 2017 he published his first children’s book, co-authored with his daughter, Cathy – ‘The Adventures of Charly Holmes’. Another adventure story was published in 2018 – ‘Charly & The Superheroes’. Rumour has it that a third adventure will be coming out later in 2019.

Find out more about the author at – http://www.timwalkerwrites.co.uk